A career diplomat with thirty four years of experience, scholar of international relations and former journalist, Venu Rajamony is a well known public speaker, author and patron of arts and culture. He is currently Professor of Diplomatic Practice at the Jindal Global Law School of the O.P. Jindal Global University, Sonipat, Haryana. 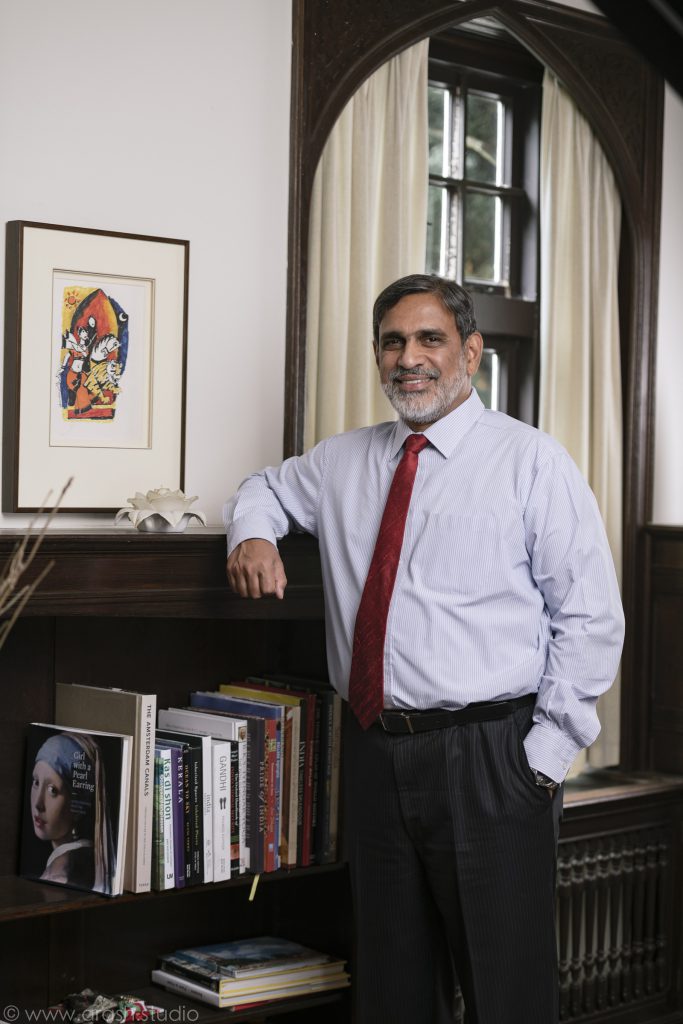 Ambassador Rajamony’s tenure in the Netherlands saw a vibrancy in bilateral relations like never before. It witnessed the exchange of several high-level visits and a number of unique initiatives to enhance the profile of India. These included the opening of the Ambassador’s house, a historic monument to the public; a tourism promotion initiative called “Bollywood on a Boat” in the canals of Amsterdam; whole day wellness festivals to mark International Yoga Day in Amsterdam’s Museumplein and Dam Square; annual Gandhi Marches in the city of The Hague and an outreach programme to schools and colleges disseminating the message of non violence. Economic relations between the two countries, especially mutual investments also reached new heights during this period. Ambassador Rajamony appeared on behalf of India before the International Court of Justice in the matter of “Advisory Opinion concerning the Legal Consequences of the Separation of the Chagos Archipelago from Mauritius.” He was Member of the Indian delegation before the ICJ in the Jadhav case (India v. Pakistan) and Co-Agent of India in Enrica Lexie case (Italy v. India) before the Permanent Court of Arbitration.

Ambassador Rajamony authored two books during this tenure in the Netherlands – What We Can Learn From The Dutch – Rebuilding Kerala post 2018 Floods and India and the Netherlands – Past, Present and Future. The latter was released by Dutch King Willem-Alexander in September 2019 and has won praise as an encyclopedia of the cross-cultural encounter between India and the Netherlands. The book What Can We Learn From The Dutch – Rebuilding Kerala Post 2018 Floods was released in January 2019. It describes the Dutch response to floods over history, their innovations in water management, and the lessons the state of Kerala in India could learn from them. A Malayalam translation of the book titled -Pralayam, Prathirodham, Punarnirmanam – Padikkaam Dutch Paadangal was released by Kerala Chief Minister Pinarayi Vijayan in January 2021 in the presence of the Leader of Opposition Ramesh Chennithala and former Chief Minister Oommen Chandy.

Rajamony held the office of Press Secretary to Indian President Pranab Mukherjee from 2012 to 2017. He was part of President Mukherjee’s team during interaction with visiting leaders such as Emperor Akihito of Japan, President Xi Jinping of China, President Vladimir Putin of Russia and President Barack Obama of USA. He was member of President Mukherjee’s delegation during State visits to 20 countries, including China, Russia, Israel, Bangladesh, and Vietnam. He also accompanied the President on more than 100 official tours within India.

Rajamony served as Joint Secretary and head of Multilateral Institutions Division of the Department of Economic Affairs, Ministry of Finance, Government of India from 2010-2012.

Rajamony’s tenure as Consul General of India in Dubai from 2007 to 2010 marked a high point in relations between India and the United Arab Emirates. He received great acclaim for his efforts to advance the welfare of the over two million Indians, promote trade and investment, reach out to UAE nationals, and enhance India’s image and soft power. He capped his stint in Dubai with the publication of a coffee table book titled India and the UAE: In Celebration of a Legendary Friendship. A Malayalam version of the book was released in Kerala in 2013 and the Arabic version was published in the UAE in 2014.

Rajamony also served in the Indian missions in Hong Kong, Beijing, Geneva, and Washington, D.C. He worked as Chef de Cabinet to External Affairs Minister Yashwant Sinha from 2003 to 2005 and was Asia Foundation Fellow at the Centre for Strategic and International Studies in Washington DC between 2001 and 2002. He authored a monograph – ‘The India-China-US Triangle: A Soft Balance of Power in the Making’ during his fellowship at the CSIS. Fluent in Chinese, which he studied at the University of Hong Kong, Rajamony is proficient in Tamil, Hindi, Malayalam, and French.

Prior to the Foreign Service, Rajamony was Kochi Correspondent of the national daily Indian Express from 1983 to 1986. He was born in Thiruvananthapuram, Kerala and had his early education in prestigious institutions of the city. He obtained an LLB degree degrees from Mahatma Gandhi University, Kerala and a Masters in International Studies from Jawaharlal Nehru University, New Delhi. He was elected Vice President of the JNU Students Union in 1981-82 and Chairman of the Students Union of Maharaja’s College, Ernakulam in 1980-81.?.